WELCOME TO AN AMERICAN ORIGINAL

American singer-songwriter Jack Cole Mitchell's musical roots were seeded and nurtured from birth listening to the Sons of the Pioneers, Marty Robbins, Hank Williams, and Willie Nelson, filtered through the Rolling Stones and Faces. The musical tree that now stands bears a fruit coined "roots music from the fringe of blue collar Americana."

Progress was stunted in the early 90s by major health issues including blindness. This setback was overcome resulting in a stylistic growth and writing flurry that continues through the present.

Six songs from the album Nobody's Blues have been licensed for the TV series Friday Night Lights, another to Billy Bob Thornton's film, Baytown Outlaws. Also, the composition "Gravity", co-written with Keith Drummond, was licensed to the film First Snow.

With the new world conditions in which we are living, performance opportunities will be limited to Youtube videos (one or two per month) or other live feeds when possible. Also, stay tuned for "the rest of my days" the first release from Muscle Shoals due out after the first of the year. Join our mailing list for exclusive news and updates. 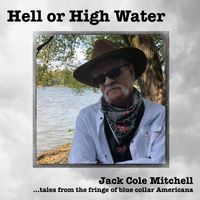 Hell or High Water... Tales from the fringe of blue collar Americana.